Catalonia and the independence challenge: 1-0

As I couldn’t vote, the day of the catalan referendum was an unmissable opportunity to take historical pictures. International media show what their audiences want to see, I hope with these pictures you will have another idea of what (the f*ck) is happening these days in Barcelona. I am not going to talk about politics; it is not the right place for that.

I spent the day walking in the streets of Barcelona city center catching stress, tensions, pride and happiness.

My friend Maurice Moeliker Photography had the great idea idea for starting place of the day: the biggest polling stations of Barcelona.

The night before, people begun occupying polling stations in a bid to ensure sunday’s vote goes ahead. People recommended to vote at the opening (7am), that’s why there were already hundreds of people when I arrived. People were making a human chain to make a way for the entrance & exit. There was no violence there, but it seemed totally messy for a referendum day.

With my camera, I could have an invisible press pass and go in easily. 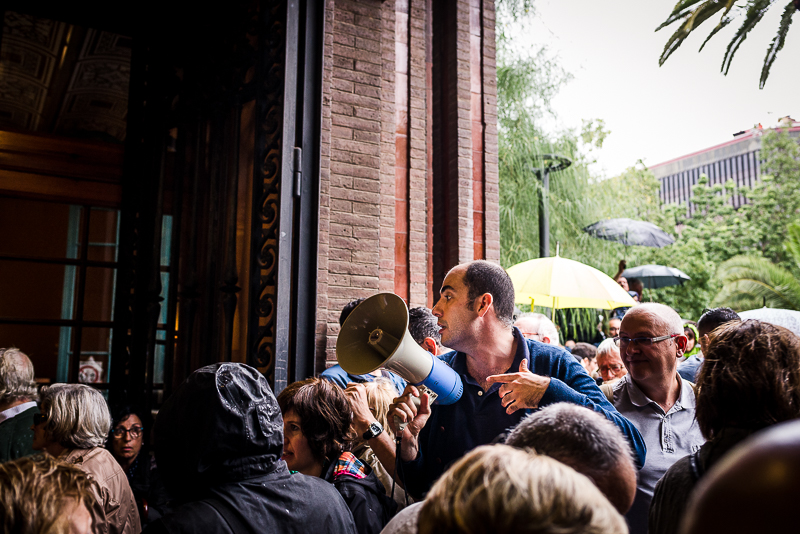 One of the voting room of the Escuela Industrial. 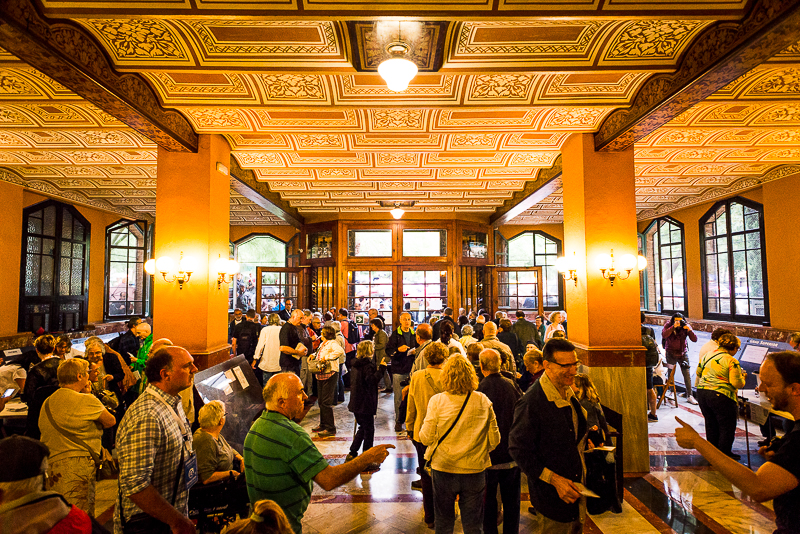 The main room of the building, improvised as the second voting room. 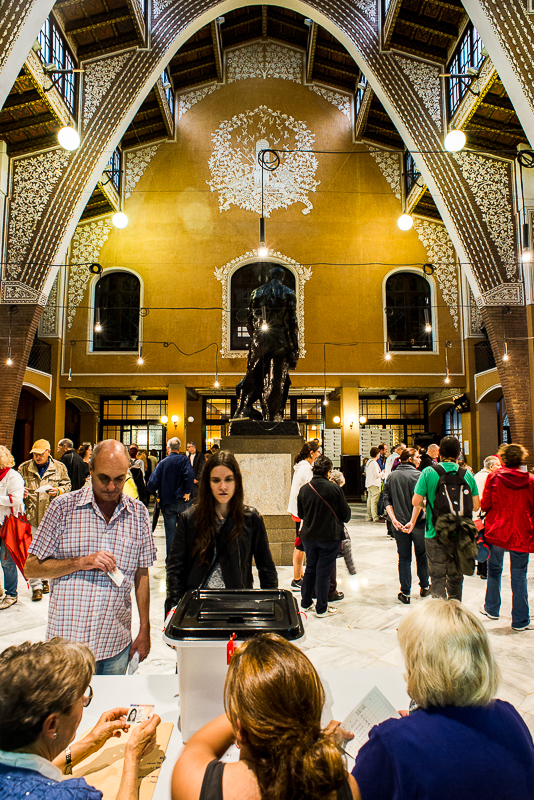 The precious ballot translated in 3 languages: Catalan, Spanish and Aranès (kind of Occitan). This man told me: “I have waited for that since decades, and today I m proud to vote! This is an important day in my life.” 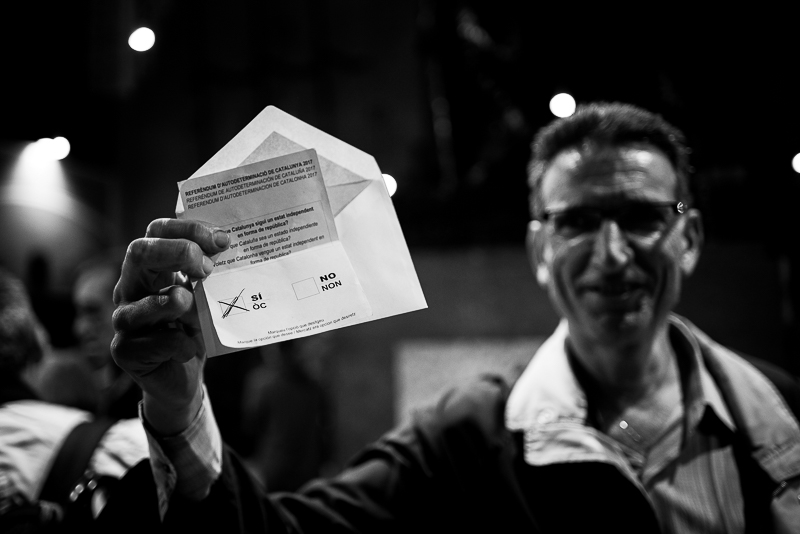 Escola industrial was a spot I wanted to explore since months! Built as a textile factory, the main room is another example of the astonished modernist architecture of Barcelona. 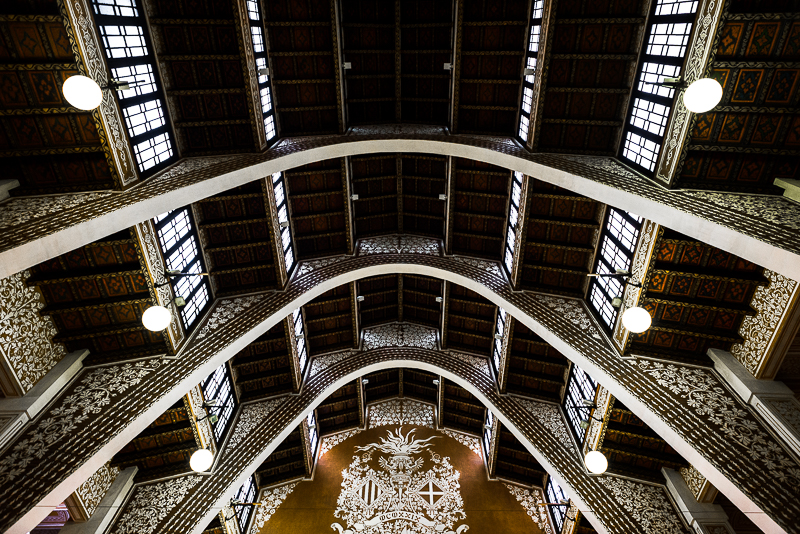 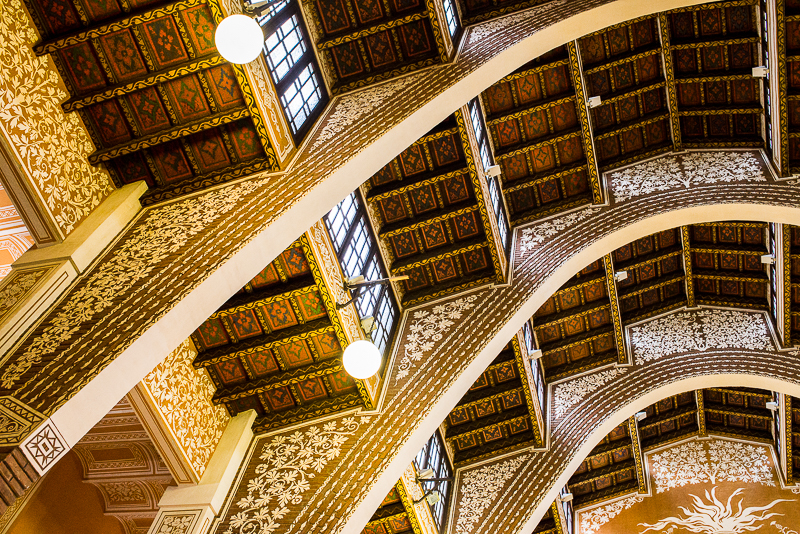 Outside, people are applauding voters at the exit of the room, happy to finally have the opportunity to express their opinions. 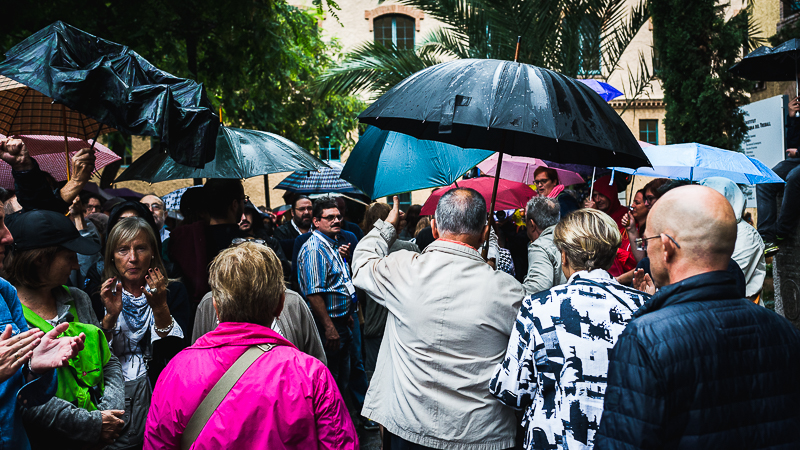 Catalans are not all pro independence, and some of them want to have the choice to vote yes, or not. So it’s not only a division between Spain and Catalonia, it’s also a separation between Catalan people. 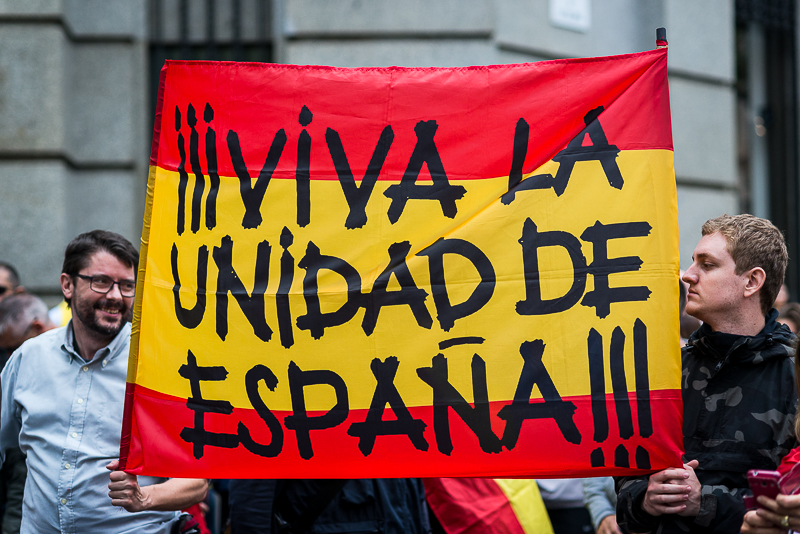 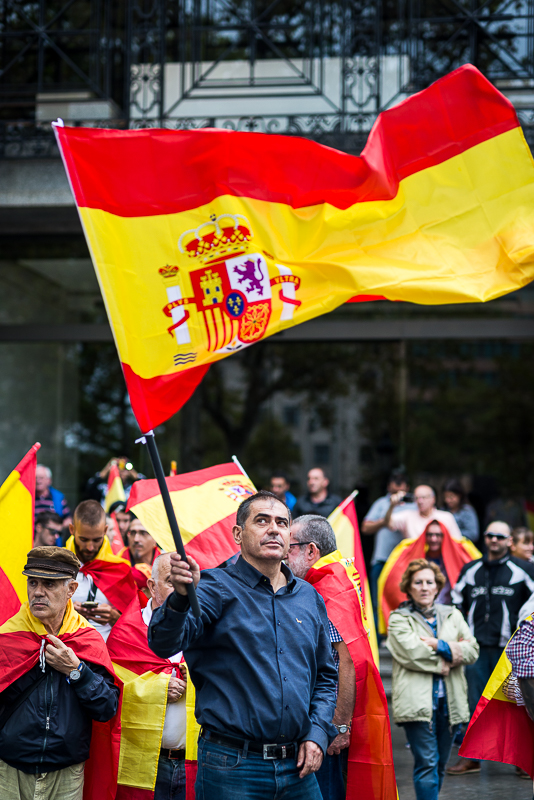 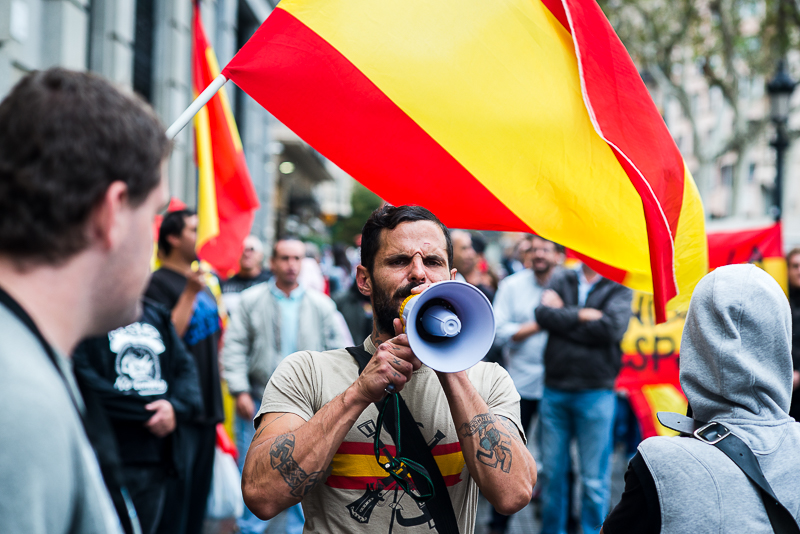 During big events like that, it’s not rare to see consistently the police helicopter in the sky. That’s a strange feeling to be watch all the time,. 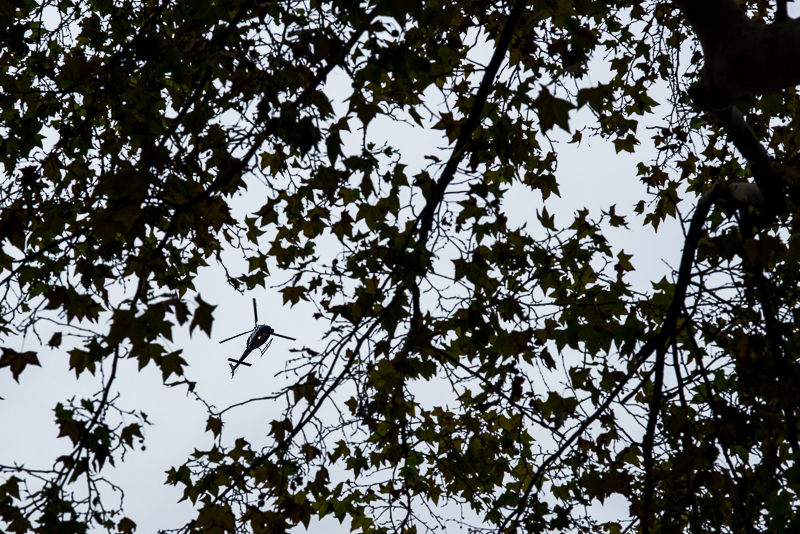 This is typical from Catalonia. The catalan flag is everywhere in the streets, in the offices, on the buildings. This one is massive, and it is situated in front of a famous tourist attraction. 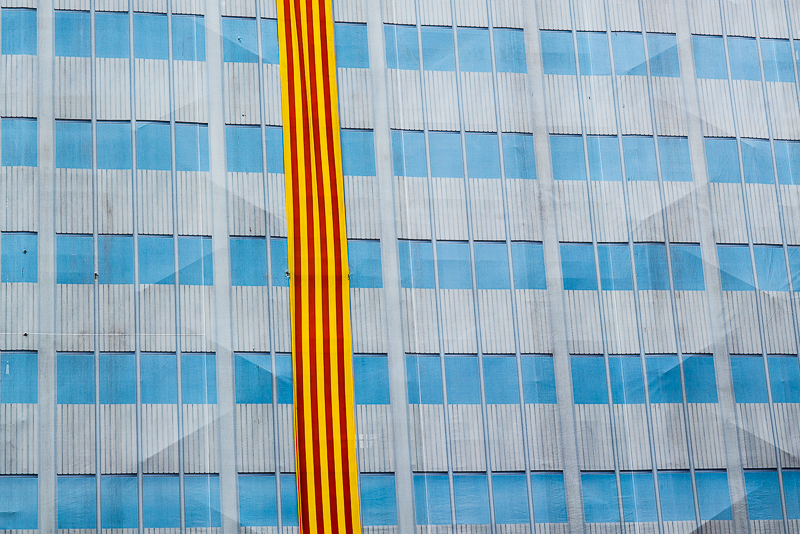 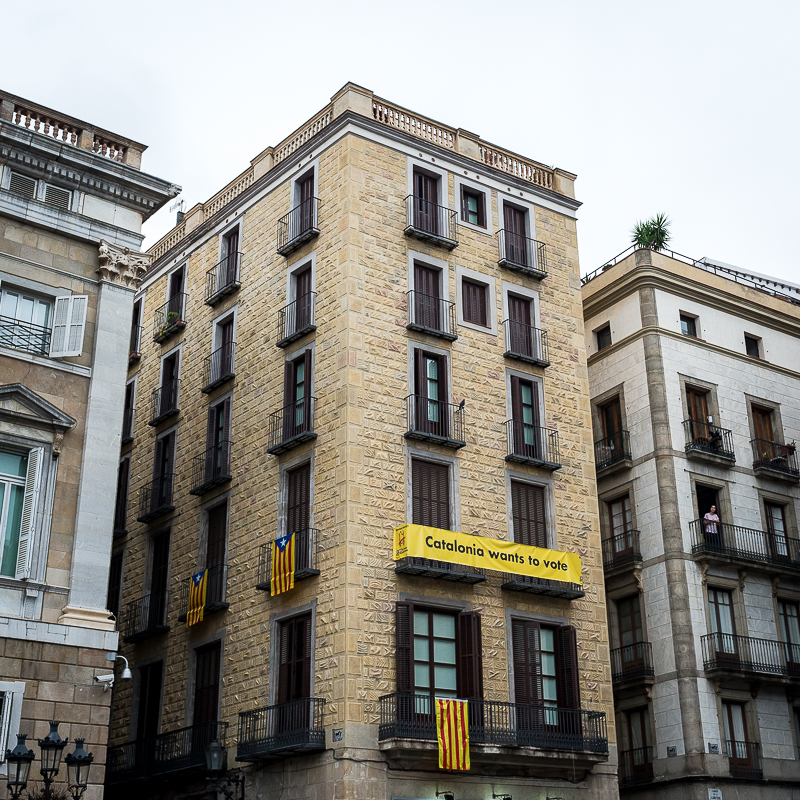 The City Hall place was guarded like a fortress by dozens of policemen. Nothing really happened there, a part of black tinted cars going in and going out.
But the policemen are photogenic subjects and can make strong images. It is forbidden to take pictures of them in Spain (!), but this day they had better to do. 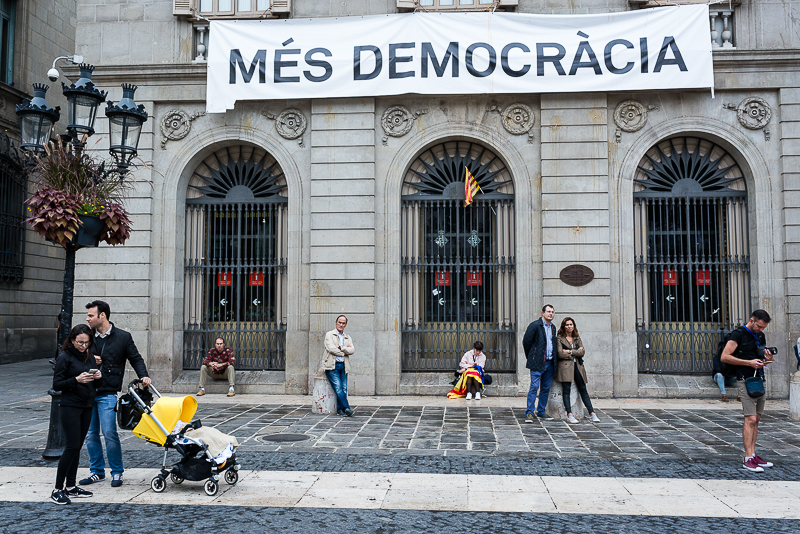 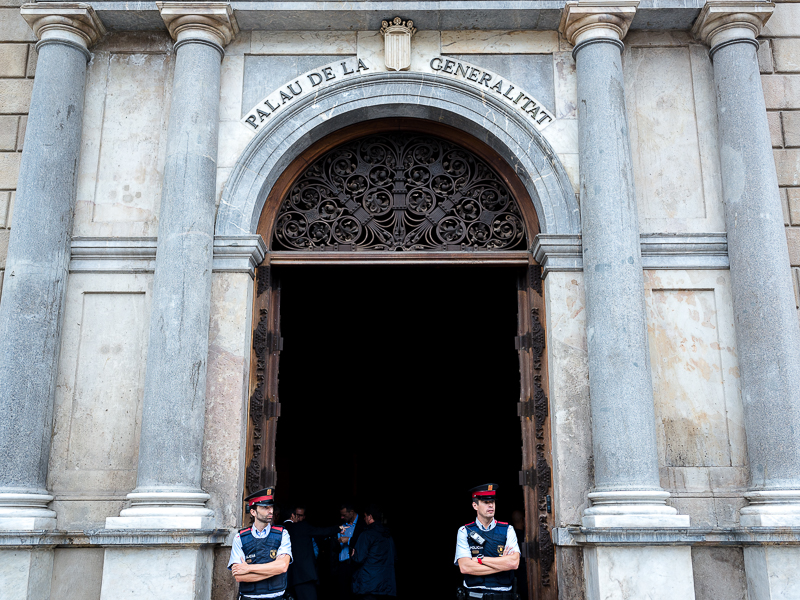 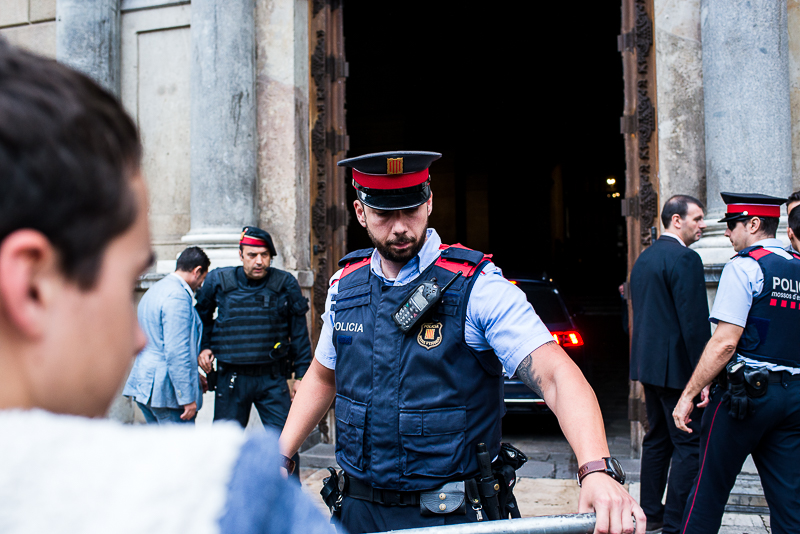 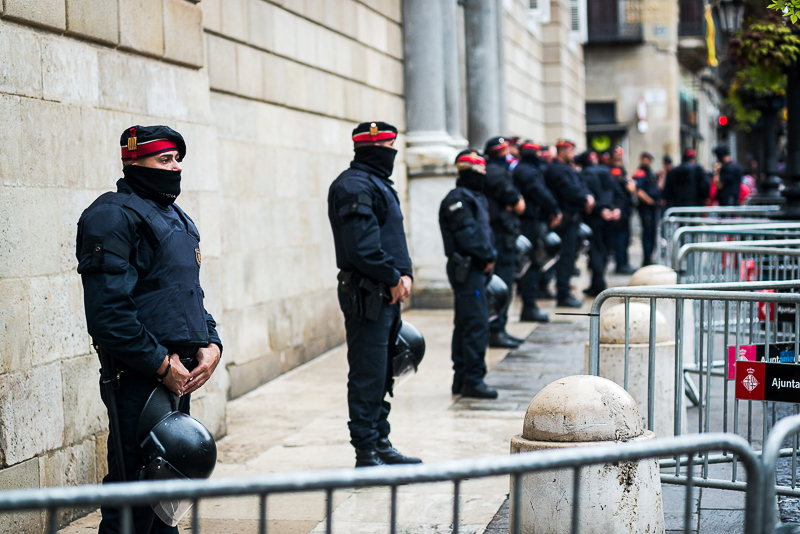 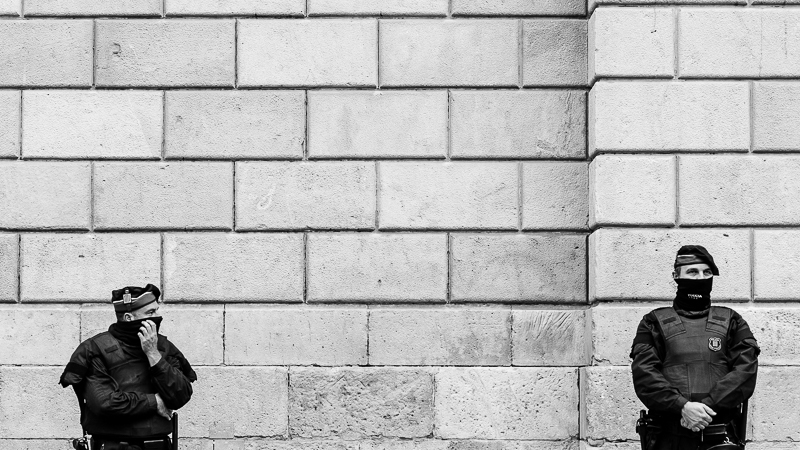 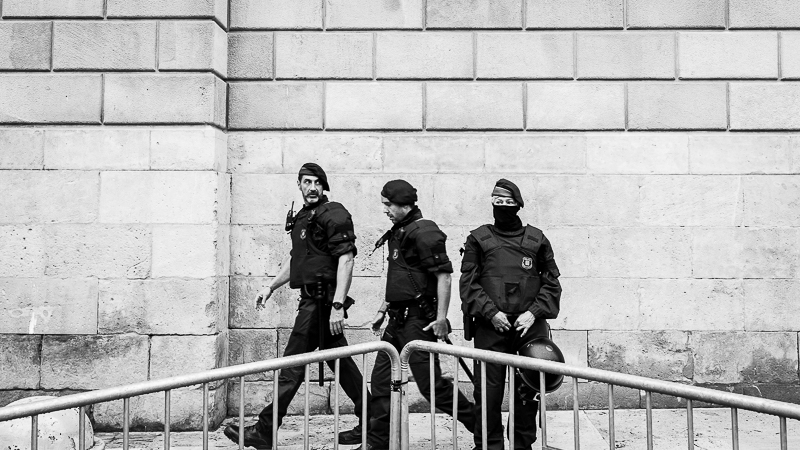 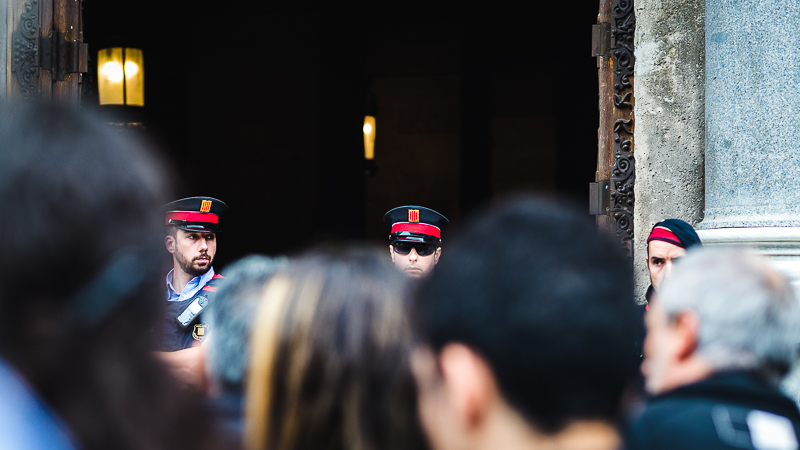 International media are here to communicate on this referendum day. For once, the tourists deserted the city center and the streets are empty. 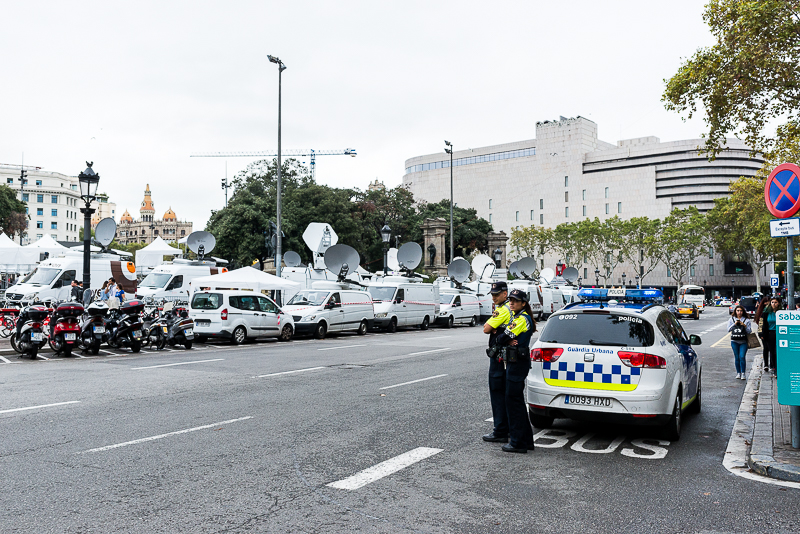 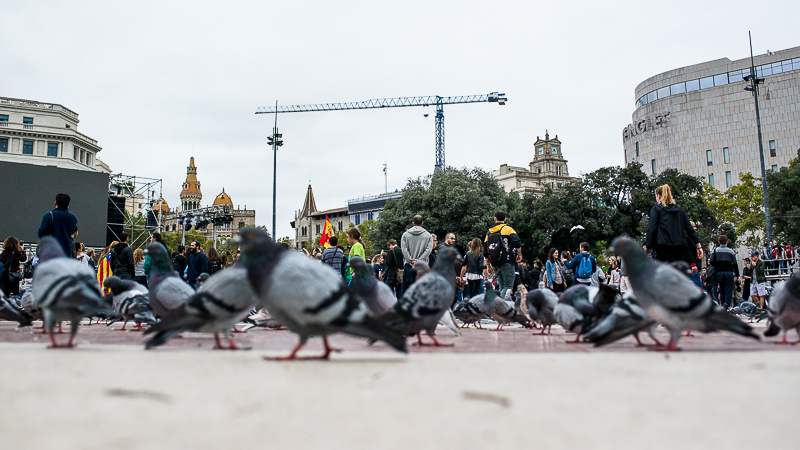 The atmosphere is tense, there is 50 policemen all around the place. There are definitely ready to protect, defend, or whatever. The one in the foreground is coming and looking for me taking pictures. My friend Terry Lair Photography and I moved very quickly, we didn’t want to play with him. 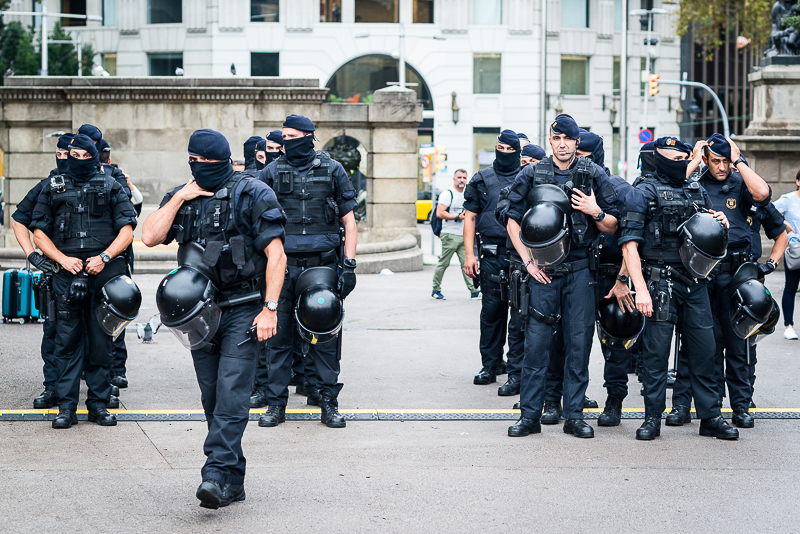 A little sweetness in this cruel world 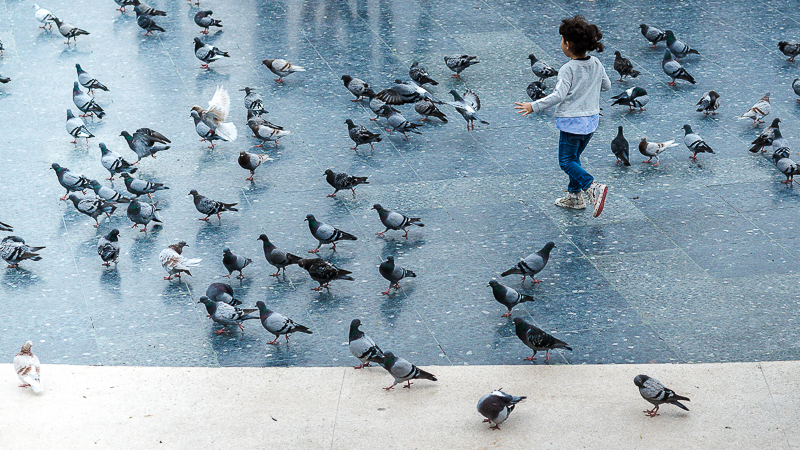 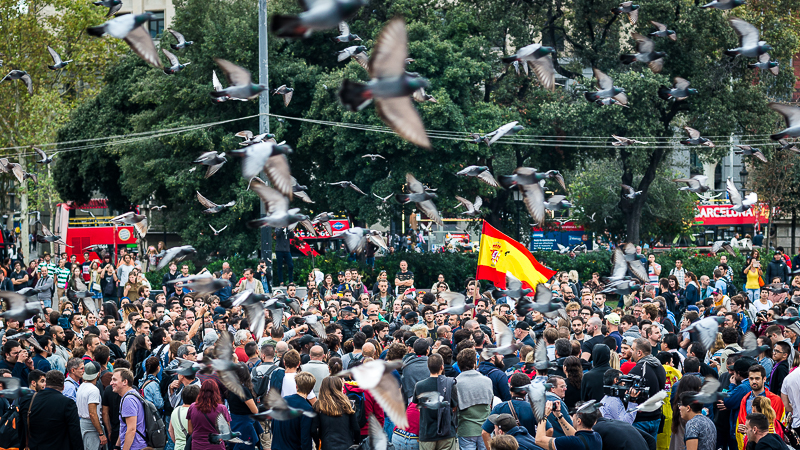 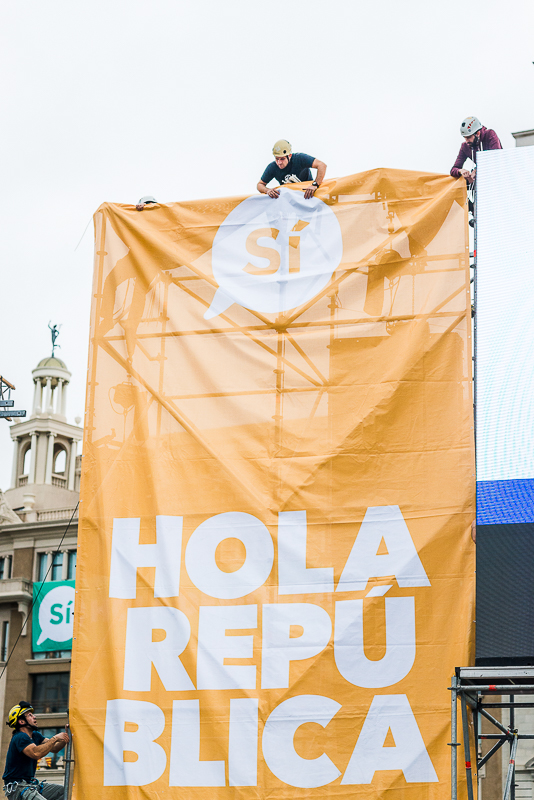 The big screen of the plaza Catalunya showing police violence during the referendum day. 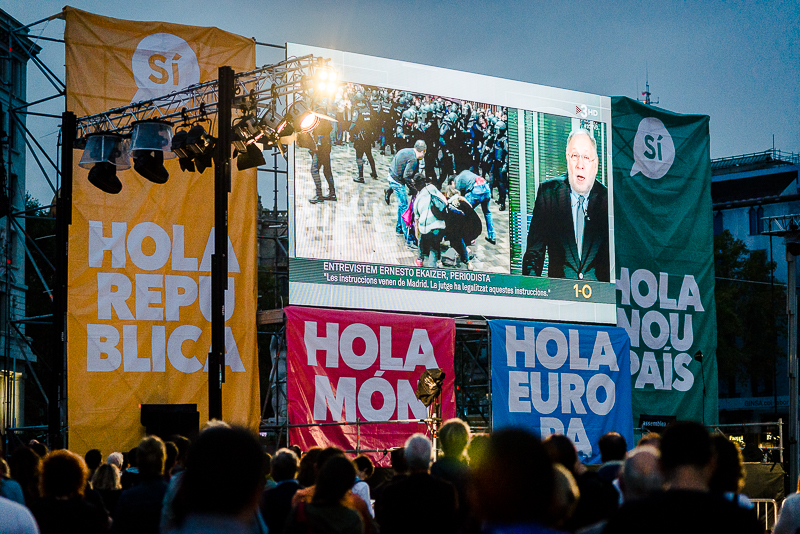 I posted some pictures of the big strike of the 3rd of October on my Facebook page. It will be on my blog very soon.